Home / Environment / The road to nowhere -The devastation of erosion

The road to nowhere -The devastation of erosion

Hello,I will like to share my article which was first published in The Guardian on November 11, 2009. The State and Federal Government have since stepped in and rescued the situation and I will bring you an update on that later. Enjoy.

My recent trip to Anambra State for the burial and funeral of Nwazulu, my father-in-law was a rude shock and a pointer to the decay in the society…the utter neglect of our social responsibilities and the insincerity of our leaders.

Driving down the Amawbia-Ekwulobia road was a nightmare. The length and breadth of the road, uncharacteristically in good condition, was littered with road blocks manned by fierce-looking, gun-totting, military and mobile police men, reducing the flow of traffic to a snail pace. My first impression was that another Aguleri/Umuleri war had broken out in my beloved state but on enquiry I was told that this was the Government’s answer to the dare devil kidnappers that had besieged the state.

As I navigated through the felled tree trunks traversing the road, I was at my courteous best, ever ready to elicit the sympathy of the men on guard, by mentioning the purpose of my trip. It still took me about 45 minutes to get to Nanka, a trip that ordinarily should take 15 minutes.

As I branched off the major road to the dirt road leading to my family house in Ifite Village, Nanka, it was evident that the usual road work by the villagers had not taken place in a long while. The trenches dug by the side to check the flood and reduce the rate at which the dirt road is washed away were overflowing. With dexterity and patience, I eventually reached the comfort of my family house, not without strain on the Peugeot 504 that I was driving.

I was soon to forget all the travails as I met my family and kinsmen and was enveloped in that bond that defines us. Though I had not visited home since 2007, I was at home with my surroundings and the unveiled love on display could be touched. I slept soundly, without the hum of the generator, yet I enjoyed the natural air conditioning that is guaranteed in my village. The cool breeze from the nearby erosion (mbuze) was a delight and I unconsciously covered myself in the course of the night.

Early Friday morning, before journeying to Awka for the audious task of Ikpu Akwa on the remains of Nwazulu, I walked down with my cousin, Kenneth to see the devastation of the rampaging mbuze, which had taken another chunk of land in its last foray in 2008. As I stood and looked, I knew I had a reason to push myself and write again. Perhaps some help might come… to the Ifite people who have been displaced and those who are next in line, to the people of Amako Village whose only link road had been severed and to Nanka and other erosion ridden communities in Anambra State, who might soon be erased from the map, if nothing is done.

The Government had come and gone, promises had been made, but the truth is that promises cannot save Nanka from the impending tragedy. The land is fast receding and we will live with the reality that we did nothing about it. 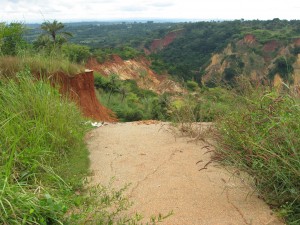 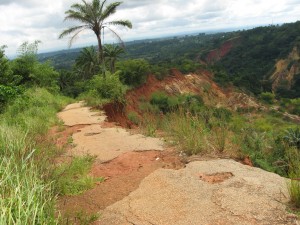