Home / Football / A thrilling encounter between the Oranje and the Socceroos

A thrilling encounter between the Oranje and the Socceroos

The terrific display of the Dutch side in their opening match against Spain proved not to be a fluke as they served up another scintillating performance in their courageous win over the hard fighting Aussies. This was a day the bald headed Dutch magician, Arjen Robben, who looked anything but his sprightly 30 years shone like a million stars. His man of the match performance typifying the resolve imbued on the side by their wily old tactician; Louis Van Gaal, who apparently still has space in his trophy laden cabinet.

The first goal of the match came on the 20th minute, when the elusive Robben skipped away from the half way line, down the pitch, finishing off in style for his third goal of the tournament. The stubborn Australian side, who gave a valiant account of themselves in their first match against Chile, however didn’t read the script and their 34 years old veteran midfielder; Tim Cahill produced one of the goals of the tournament with an audacious volley off an accurate cross from McGowan.

The second half started with Netherlands changing their formation to 4-3-3 as Memphis Depay replaced the injured Martins Indi. Bouyed by their equaliser, the Australians were still causing the Dutch problems with their direct play and were soon 2:1 up when the unfortunate Daryl Janmaat was penalised for handling in the box and the Australian Captain; Jedinak stepped up and converted from the spot.

The new Dutch formation freed up Wesley Sneijder, who had been anonymous in the first half and he did well to find Robin Van Persie in the box and he equalised with a thunderous strike on the 58th minute. The momentum had swung to the Dutch and with their array of attacking talents they took full advantage and were soon 3:2 up when Memphis Depay’s fortuitous solo effort sneaked in beyond the diving Ryan, in goal for Australia.

Australia’s Tim Cahill, who would miss their final game through suspension, bowed out with a scoring record of five goals in his third world cup finals, which is unlikely to be surpassed soon by an Australian player.

The Dutch in their part will solely miss the inspirational Van Parsie in their final group match against Chile as he equally picked up a second yellow. However, qualification for the second round had been secured and they will forget all else and savour their 3:2 victory over Australia. 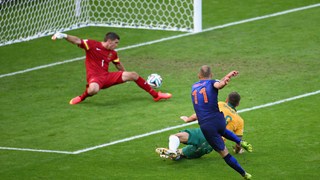 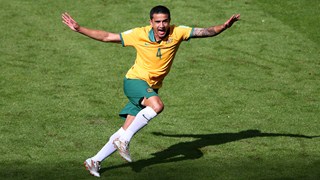