The group G encounter between Germany and Ghana promised to be intriguing, especially on the backdrop of the two Boateng brothers playing for either country, Jerome for Germany and Kevin-Prince for Ghana. Germany had dismantled Portugal in their opening match, while Ghana had lost to USA despite their gallant efforts.

My loyalty was split; Ghana is our West African neighbour that inspires love-hate emotions in Nigerians while Germany is one of my favorite teams with a classic National Anthem that never fails to excite. “Das Lied der Deutschen” is sung to the classic tune written by the prolific Austrian composer; Joseph Haydn in 1797.

The game started with the two teams admirably grafting to take control of the game. Christian Atsu’s shot on the 12th minute was saved by Neuer as the entertaining Ghanaian side began to get in their stride. Dauda pulled off a comfortable save from Khedira on the 18th minute as Germany toiled. A brilliant pass from Ozil to the prolific Muller was smothered by the watchful Ghanaian defence.

Muntari’s firecracker of a shot on the 33rd minute ruffled the normally calm Neuer, who punched away. Thereafter Gyan outpaced Mertesacker but couldn’t get the ball beyond Neuer. Germany were however looking dangerous on the counter with Ozil and Gotze trying to break down the resilient Ghana defence. First half ended goalless in a balanced performance by both teams.

Germany brought on Mustafi for Jerome Boateng in the second half as the two teams battled on. Ghana’s energetic display was making Germany look ordinary. The first goal of the match came in the 51st minute, when a beautiful cross from Muller was headed in by Gotze and Ghana reacted immediately by bringing on Jordan Ayew for Kevin-Prince. Andre Ayew however responded with a powerful header in the 54th minute to draw level.

an intercepted pass in midfield by Muntari released the lively Asamoah Gyan who finished brilliantly on the 63rd minute to spark off a dance routine as they celebrated. Germany began to control possession as they sought to take control. Jordan Ayew’s weak shot on a counter attacking move was well saved by Neuer as the packed stadium cheered the Ghanaians on.

Klose came on for Gotze while schweinsteiger replaced Khedira as the Germans looked for an equaliser. Klose scored his 15th World Cup finals goal almost immediately as he tapped in from the far post on the 71st minute. Wakaso came on for Atsu as Ghana tried to contain the reinvigorated Germans.

A foul by Jordan Ayew set up a free kick for Germany in a promising area but Schweinsteiger’s kick went over. Agmeyang-Badu replaced Rabiu for Ghana’s final change. Muntari’s long pass found Gyan who released Jordan but he was caught offside. Muller, who had been quiet, almost won it on the counter but the retreating Kwadwo Asamoah cleared magnificently. Ozil sneaked in but his cross was cleared brilliantly by the sturdy Jonathan Mensah.

Gyan went wide on another Ghana move and on the other end Klose returned the favours off an Ozil pass. Kronos’ corner was punched away by Dauda and Ghana wasted a brilliant counter attacking move that should have won the game.

Muntari’s foul earned him an expensive caution that would see him miss their final group game and set up another free kick for Germany. Kroos’ kick was headed away by Boye and a clash of heads with the bloodied Muller left both players in pains on the deck as the game ended; Germany 2: Ghana 2. A brilliant display by the Black Stars rattled the Germans and brought them back to earth after their mauling of Portugal. 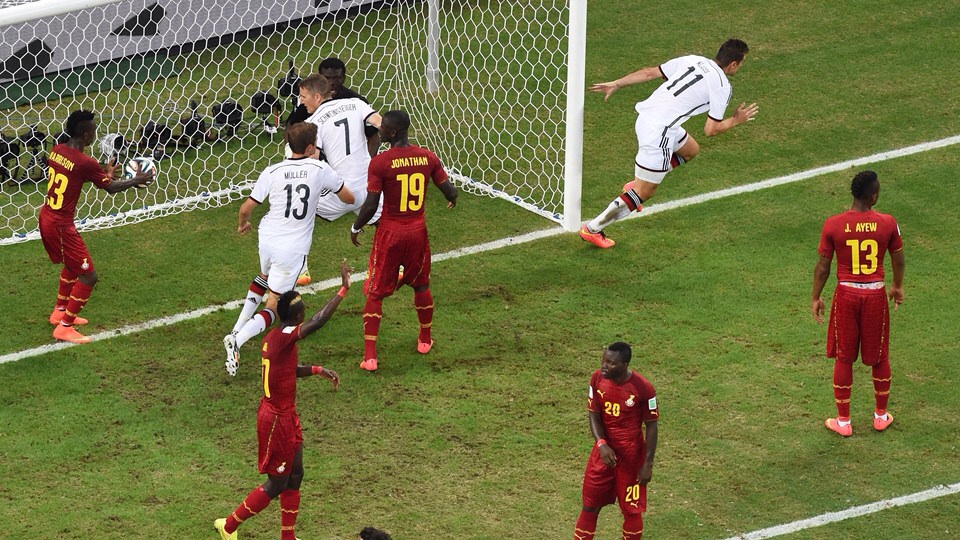 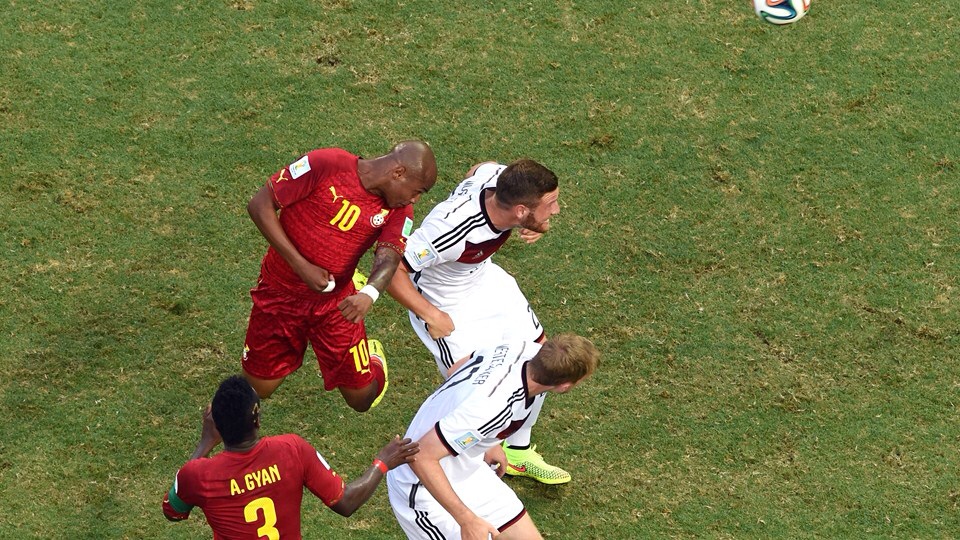 Previous: Les Blues breeze through the Swiss challenge
Next: A hard fought victory for the Super Eagles