Colombia, one of the surprise teams of this tournament will look to continue their winning form with a win over Uruguay, a team tainted by the antics of Luiz Suarez, their star striker disgraced out of the World Cup for biting Italy’s Giorgio Chiellini.

The game started with Uruguay aggressively trying to break up the Colombian play. Cuadrado was proving a thorn in the flesh of Pereira, Uruguay’s left back. Caceres stormed forward on the counter but couldn’t find Cavani. Colombia attacked through Zuniga and earned a free kick, when he was stopped by Cavani.

Juan Zuniga’s shot on the 12th minute was saved awkwardly by Muslera. Cavani valiantly won the ball in midfield and set up Forlan, but his shot went over. Cavani was operating as the sole striker in Suarez’s absence, with Forlan supporting from deep. Colombia were dominating play with their centre backs; Yepes and Zapata influential in their play.

A brilliant searching pass from Godin for Cavani, but he failed to control. Out of the blues, the brilliant James Rodriguez’s chested the ball outside the box on the 28th minute and struck first time, beating Muslera with an audacious shot. His fourth of the tournament; a star is indeed born. What a goal… the best of the tournament by my estimation.

Cavani’s cross in for Christian Rodriguez was diverted by a vital touch from Sanchez. Cavani’s fine free kick went slightly over as Uruguay fought to get back in the game. The Colombians were however not ready to give in and were impressing with their crisp passing. First half ended 1:0 in favour of Colombia.

The second half started with Ospina saving well from a Uruguay corner. A fine attacking move from Colombia on the 50th minute produced the second goal of the encounter. Armero was freed on the overlap by Jackson Martinez and his sumptuous cross was cushioned down by Cuadrado for the golden boy James Rodriguez to finish off.

Ramirez came in for Pereira and Stuani for Diego Forlan as Uruguay sought a response. Gonzalez’s shot on the 59th minute was saved by Ospina as Uruguay continued to press. Cuadrado was causing Uruguay problems with his fancy foot works. Christian Rodriguez’s fierce shot was saved by Ospina on the 61st minute. Uruguay brought on Hernandez for Gonzalez while Gutierrez was replaced by Mejia for Colombia.

Ospina did well to divert Stuani’s looping cross over his goal as Colombia held on to their lead. Ospina pulls off another save from Perreira to maintain their lead. The impressive Cuadrado was replaced by Guarin on the 81st minute. An inspired Ospina saves again from a Cavani shot on the 85th minute as James Rodriguez made way for Adrian Ramos.

Ramirez’s free kick on the 88th minute was again saved by Ospina who has kept Uruguay at bay with his saves. Columbia look set to get to their first quarter finals as they contain the Uruguay attacks.

Colombia held on to win 2:0 and set up a quarter final encounter with Brazil. A compelling team performance by Colombia and an excellent display by James Rodriguez, who has so far scored five in this tournament. 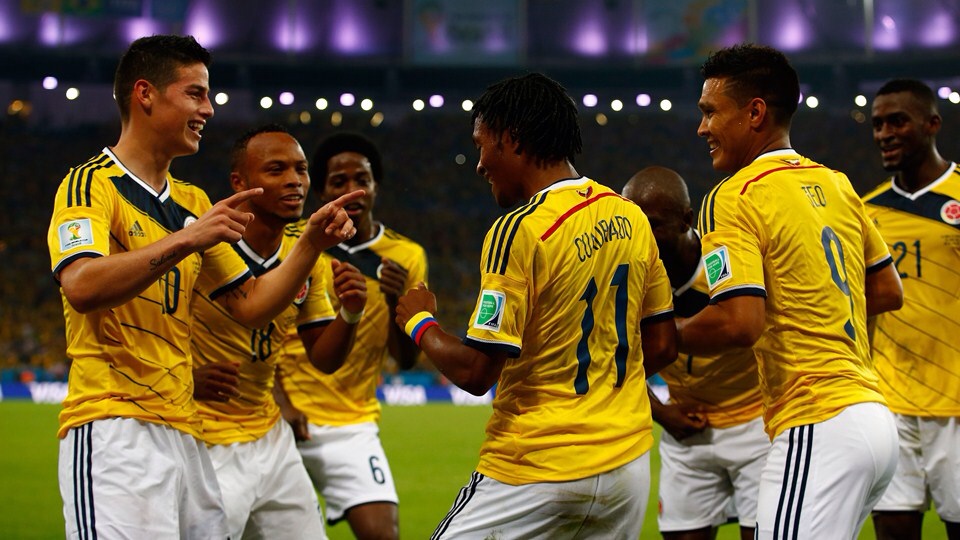 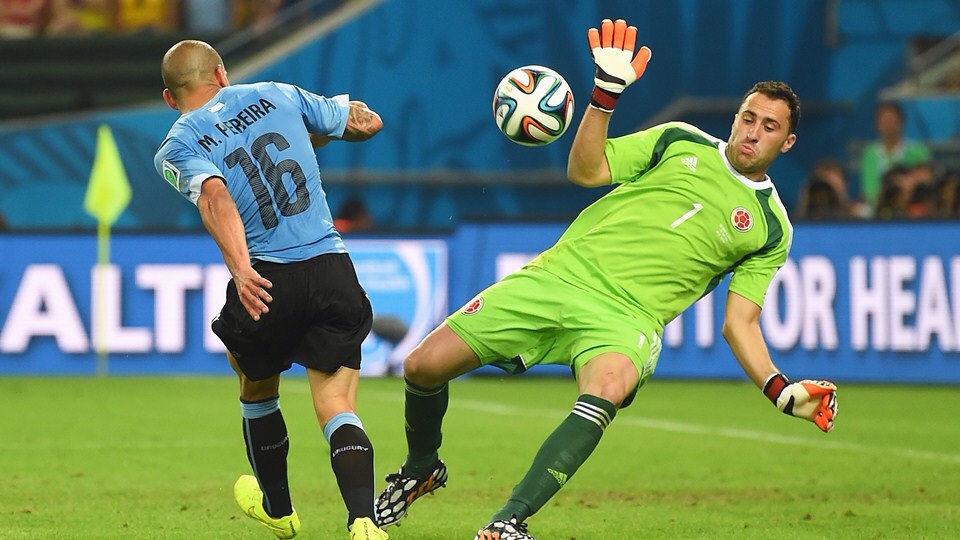 Previous: Brazil edges Chile out on penalties
Next: Hunterlaar fires Netherlands into the quarter finals