Krul saves two penalties to propel the Dutch to the semis

The last quarter final match pitches the tricky Dutch team led by Louis Van Gaal against a well organised and inspired Costa Rican side. The experience and skill of the Dutch side makes them favourites to progress ahead of their less fancied opponents.

The game started with Netherlands attacking early and looking to settle into their passing game. De Vrij fouls Bolanos on the 3rd minute but Costa Rica’s free kick is over hit and goes out for a goal kick. Robben wins a corner on the 7th minute after fine work to get into the box. Navas’ long goal kick to release Bolanos, went out for a goal kick. The Dutch are dominating play and it is only a matter of time for them to pry open this Costa Rican defence.

Campbell does well to release Gamboa on the 19th minute, but his cross is cleared for a throw in. Depay finds Van Persie in the box on the 21st minute but Navas pulls off a double save from Van Persie and Sneijder. Diaz gives the ball away to Robben but the counter by Kuyt and Van Persie was foiled by the offside flag.

Sneijder fouls Ruiz but Bolanos’ free kick goes over. Van Persie drives in from midfield on the 28th minute and releases Depay but his shot was stopped by Navas’ outstretched leg. Campbell is looking dangerous on the right but Blind manages to dispossess him. A free kick is awarded to Costa Rica for a Van Persie foul but Cillessen saves from Bolanos’ strike. At the opposite end the whistle goes against Robben when it looked as if he had been fouled. His reputation for diving really working against him in this game.

Bolanos’ free kick on the 33rd minute was cleared by Van Persie and Robben countered with pace. Diaz picks a yellow for a foul on Robben and sets up a well placed free kick for the Dutch. Sneijder’s fine strike produced an equally fine save from the outstanding Navas. Robben drives in on the 41st minute and releases Van Persie but Navas rushes out and collects. Sneijder’s cross to Kuyt on the 45th minute is cleared by the Costa Rican defence to signal the end of a cagey first 45 minutes.

The second half starts with Costa Rica still sitting deep and comfortable to defend and wait for an opportunity to counter. Umana picks a yellow on the 51st minute for a foul on Robben. The well worked free kick by Robben was blasted over by Sneijder, under pressure. The boring game continued with Netherlands making all the effort. Great play from Robben and Van Persie but Ganzalez does well to clear for a corner.

Robben does well to pluck the ball from the air and cross for Kuyt but the Costa Rican defence clears again. Diaz counters on the 60th minute and releases Campbell but Martins Indi clears the danger. Campbell is fouled on the 61st minute but Bolanos blasts his free kick over. Martins Indi is cautioned on the 64th minute for a foul on Ruiz but Gonzalez heads over Bolanos’ free kick. Campbell is pulled off for Marcos Urena on the 65th minute. Urena gets straight away into the action and seems to have vitalised his side.

Robben drives in from the right and finds Van Persie but Tejeda does well to divert the return pass for a corner. Blind wins a free kick for a high foot from Gamboa but the kick is headed over by Vlaar. Memphis Depay gives way for Lens on the 75th minute as the Dutch continue their search for a goal. Robben drives into the box and wins a corner on the 77th minute as Gamboa is pulled off for Myrie. Kuyt crosses into the box but Lens was caught offside.

Gonzalez pulls at Robben just outside the box on the 81st minute and was cautioned, setting up a free kick for the Dutch. Sneijder hits the post with a fabulous free kick and the defence clears the danger. Sneijder crosses brilliantly into the box on the 88th minute but Van Persie fails to make contact. What a miss!

Diaz fouls Robben outside the box and luckily escapes a second yellow. Van Persie steps up and fires in the free kick but Navas saves. Blind kept the ball alive but Tejeda clears unto the post to deny Van Persie. The game ends goalless and extra time beckons.

The game restarts with the Dutch keeping possession at the back. Robben runs at the defence and releases Kuyt, getting a corner in the process. Navas saves from Vlaar’s header and flaps at the next corner from Sneijder as the Dutch pressure continues. Tejeda comes off for Cubero on the 6th minute of extra time. Robben attacks again and earns a free kick from a Diaz handball outside the box. Navas punches away from a Kuyt cross and the first half of extra time ends goalless.

Huntelaar comes on for Martins Indi as the Dutch continues to press. Acosta picks up a caution for a foul on Robben who gingerly steps up for the free kick. Robben’s free kick is cleared but the Dutch earn another corner as they press. Huntelaar gets a yellow for a hand on Navas’ face and the keeper gets some treatment before the game resumes. Bolanos causes panic in the Dutch area but the defence does well to clear. Bolanos attacks again and wins a corner off Vlaar but the corner kick is overhit. Urena shoots after a fine move in the Dutch area but Cillessen saves. Sneijder hits the bar again on the 28th minute of extra time as Costa Rica survive again. Cillessen comes off for Tim Krul as the game ends goalless.

Van Persie finds the back of the net to make it Netherlands 1: Costa Rica 1.

Sneijder sends the keeper the wrong way to make it Netherlands 3: Costa Rica 2.

A master stroke substitution by Van Gaal wins it for the Dutch and sets up a fantastic semi final match with Argentina. 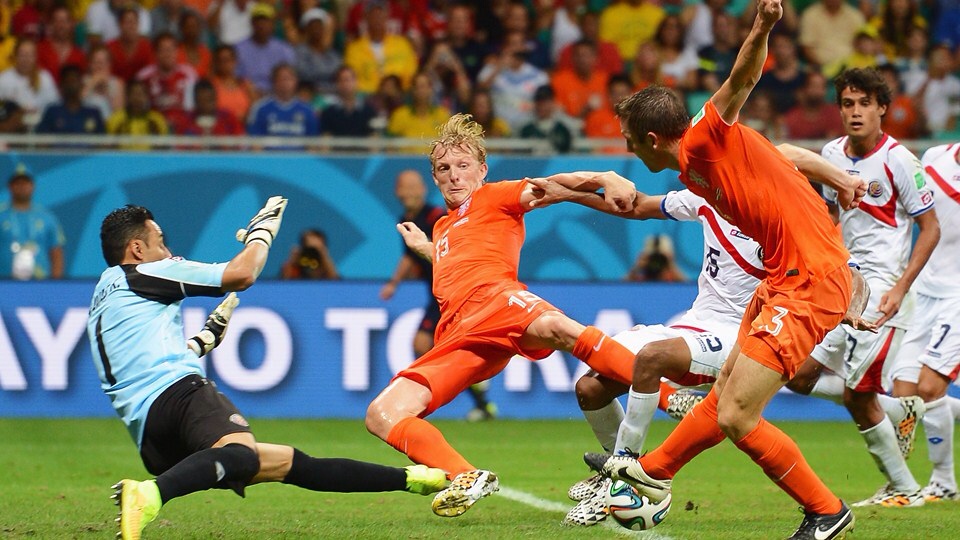 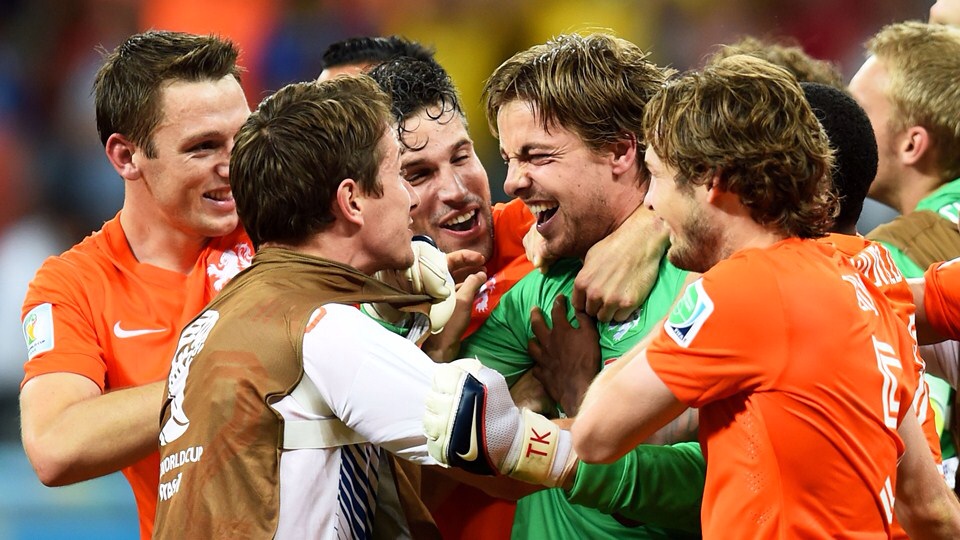