You wonder what correlation there is between foreign exchange (forex) and Hezbollah rockets? …I’ll tell you a tale.

A few days ago, I was in a business discussion with the Trade Manager of a manufacturing Company in Ikeja, Lagos. A fine Gentleman from Myanmar, given to dramatics, Jack would usually convey his message with a good dose of humour.

Our discussion on this fateful day was on the prevailing forex scarcity in Nigeria and he was trying to get across his views on the flexible exchange rate system, recently introduced by the Central Bank of Nigeria (CBN). The ensuing story left me breathless with laughter:

It was 2015 and Hezbollah, the Lebanon based terror group, had fired rockets into Israel after the assassination of their Senior Leader; Samir Kuntar. Israel was on high alert and braced up for a sustained attack following Hezbollah’s threat of a retaliation. After all the commotion however, Hezbollah was only able to fire about three rockets into Israeli territory, striking open areas with no damages or injuries.

In his analysis, the new CBN flexible exchange rate system was a rocket launch that was expected to arrest the ongoing demand crisis in the forex market. However, its effect has turned out to be akin to Hezbollah rockets… much noise, little impact.

Like Jack, many involved in manufacturing in the Country are disillusioned. The bulk of their raw material inputs are imported, leaving them at the mercy of the vagaries of the forex market. They desperately seek for sources to meet their forex demand and simply cannot afford to let their raw material stock slide below their reorder levels.

However, Jack’s courage shone through even as he joked about their inauspicious situation. He wasn’t fazed by the bleak economic outlook but rather was committed to seeking out opportunities, finding solutions and dragging his Company out of the doldrums.

Quite remarkable and I mused; “He who observes the wind will not sow and he who regards the clouds will not reap.” (Ecclesiastes 11:4) NKJV 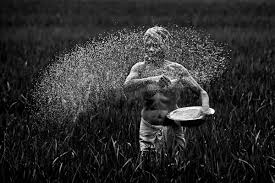